Almonds: Rancho product of the week 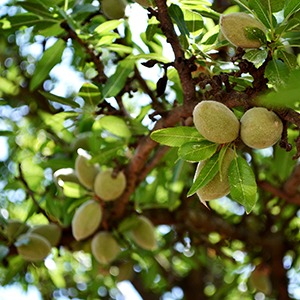 Approximately 80% of the world’s almond crops are harvested from the drought-stricken state of California. They are ranked as California’s top agricultural export and largest tree nut crop in both dollar value and land usage. With close to 900,000 acres of mature orchards in the Central Valley, almonds are a crop that positively affects many industries in communities throughout the state. California’s entire almond crop uses approximately 10% of the state’s agricultural water usage annually.

However, virtually all of the United States’ almond supply comes from California, making it an economically viable crop, unlike agricultural exports such as alfalfa (15% water usage) which is almost entirely exported out of the country for processing into animal feed to meet the global demand for dairy and beef.

Almond trees enter a state of dormancy in the late fall and winter, allowing the trees to relax and absorb nutrients in preparation for their spring bloom beginning in late February. Many species of almond tree are not self-pollinating, so in the spring, when they burst into beautiful pink and white blossoms, populations of bees are brought into the orchards to help initiate crop development. In California the annual process of transporting the bees to the almond orchards (nearly one million hives ~ almost half of the total hives in the US!) makes it the largest managed pollination event in the world, mostly facilitated by “bee brokers.”  To combat the rising costs of insect pollination due to colony collapse in bees, the Agricultural Research Service has developed a new sub-species of almond that is self-pollinating but maintains a high nut quality. Rancho Vignola’s organic almond supplier from California has resident bee hives and bee keepers, they also have planted native bushes and plants along the creek that boarders their property to help the bee population stay well fed and healthy in their area. They are very involved with bee preservation societies and have hosted research studies in their orchards.

The harvest begins in early spring when the kernels are green and fuzzy. A short-lived, special treat for Californians, the soft, immature almond has many culinary uses and can have a texture ranging from a grape to a soft almond. Typically, green almonds are not exported far from the orchards, as they only keep a few days after harvest. If left on the tree the fuzzy, edible green shell begins to harden, protecting the kernel inside as it matures. In mid-August the shells will dry out and split open, revealing the finished product. A mechanical shaker will roll through the orchards, shaking the nuts to the ground, and given eight to ten days to dry in the hot California sun. A sweeper will then come along and pick them up for shelling and sorting. Once sorted, the almonds are stored and distributed for mandatory pasteurization (USA regulations only), then processed into their various forms.

North American crops aside, almonds also grow very well in the hot, dry climes of Australia. Australian farmers employ the same time-honoured growing, pollinating and harvesting methods as those used in California, but almonds grown outside of the USA are not subject to the same pasteurization requirements. Thus Australian almonds offer an excellent alternative to consumers not wishing to purchase a pasteurized product, and are beginning to carve out their own niche in the global almond market. Rancho Vignola is proud to source both unpasteurized organic almonds from Australia as well as our, steam-pasteurized California crop.

Historically, almonds are an ancient crop, with mention of them dating as far back as 1352 BC when several handfuls of almonds were added to King Tutankhamun’s tomb to nourish him on his journey into the afterlife. Almonds are mentioned numerous times in the Old Testament of the Bible, and the ancient Romans revered them as a fertility charm for newlyweds. The kernel made regular appearances in music, art and literature as symbols of hope, beauty and rebirth. Persians wove their likeness into rugs, and Vincent Van Gogh dedicated several paintings to the popular nut.

Almonds were a compelling commodity in the Silk Road trade routes of Southwest Asia, making their way from China to the Mediterranean, as the wild almond grew accessibly along the route and the nut planted itself where the almonds landed. After they made their way into Europe, the Franciscan padres brought almonds to California in the 1700s, but it wasn’t until the turn of the twentieth century when they were established as a significant crop. In the past three decades, California’s crop yield has more than quadrupled, making it the state’s top agricultural export and a big player in a healthy US economy.

Today almonds are considered the perfect alternative to meat and dairy, contributing to the huge rise in global demand over the past couple of decades. Popular non-conventional forms of almonds include almond milk and almond meal (flour), but they can be used for almost anything, and eating them as a straight-up snack or adding them to your favourite dishes can give you a little vegan pick-me-up of protein, calcium and iron.

Give this recipe a try ~ Candied Toffee Almonds ~ great for parties and social events or take them to work!