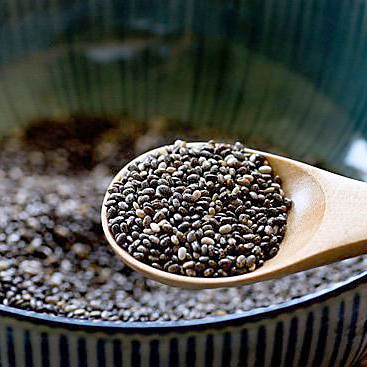 Yes, those tiny little black seeds you see exploding in popularity around you and being touted as a “superfood” are the same seeds you may have grown in the terracotta animals back in the day.

Did you know the microgreens you garnered from your little pet are also edible, tasting similar to alfalfa or broccoli sprouts? That’s like two superfoods in one!

Try sprouting them at home ~ like any microgreen, they make a fresh and nutrient-packed addition to salads and soups!

The main chia-producing countries include Argentina, Bolivia, Ecuador and Peru. Outside of Latin America, Australia is the world’s primary provider of chia, expanding every year to meet the ever-growing demand. The Aztecs used mats made of tree bark, floated onto lakes and covered in soil to allow the chia plant to self-irrigate, a pretty creative use of space, leaving agricultural land available for bigger crops, though this method is no longer employed.

The growing cycle varies over cultivation locations and is influenced by elevation. These factors also determine how much protein versus fibre each cultivar will contain. The growth cycle can be anywhere from 100 to 180 days duration, and chia farms are typically found in tropical coastal deserts, tropical rainforests and in the inter-Andean dry valleys of Peru. Until recently the photoperiodic sensitivity (the physiological reaction of the plant to the length of day or night) of the chia plant limited the commercial cultivation to tropical and subtropical latitudes. In 2012, advances in botanical breeding led to the development of an early-flowering species of chia. When the plant is able to flower before frost, seed harvesting is more viable. This allows for cultivation of the plant in temperate zones at higher altitudes in the United States.

Seed yield is dependent on the species of plant (cultivar), mode of cultivation and growing conditions. Yield can range anywhere from 450 to 2,300 kg per hectare!

Another thing that separates chia from pretty much any other plant is that it has no major diseases or crop pests to affect its production. Chia leaves contain an essential oil that have high insect-repellant properties, making it incredibly suited to organic farming practices. Weeds, frost and climate conditions may be the only factors hindering overall production of this incredible seed.

To say that the chia seed industry is booming is quite an understatement. In the last six years, the industry has grown nearly 240% and is expected to hit $1 billion by the year 2020. It is largely commercial food packaging companies that are driving the demand for chia, finding its way into everything from cereals, beverages and pasta to hamburgers and sports nutrition, with endurance athletes singing its praises.

The worldwide market for chia production has grown from 15,000 tons to over 30,000 tons annually, with the United States producing close to 7,000 tons of it. Imagine what thirty thousand tons of that itty-bitty, light little seed looks like. I think that’s beyond my scope of comprehension!

While there is evidence dating back as far as 3,500 BC for the use of chia seeds, it wasn’t until about 300 AD that historical records were kept of their cultivation and usage.

The Mayans were the first to document the chia plant, followed further down the road by the Aztecs in the 1500s.

The significant record keeping indicated that the chia plant was as important in the diets of the two cultures as maize (a widely used species of corn).

The usefulness of the chia seed doesn’t stop at dietary importance, however. The Aztecs used chia to treat wounds, constipation and colds. The plant also played a large role in currency systems, religious ceremonies and athletic training. The health benefits of the seeds didn’t go unnoticed by the ancient cultures and they didn’t need scientists to tell them the seed would help sustain the warriors on their long conquests.

The usage of chia seeds was largely suppressed following the conquering of the Aztec Empire by the Spanish in the early 1500s. They surged back into popularity when scientists began analyzing their dietary properties, quickly coming to the conclusion that there is no other plant like it.

Chia seeds are one of the only sources of complete protein on the planet. That means that a single serving of chia seeds can net you almost the full recommended daily intake of all nine essential amino acids. Not even fish can provide all of the important omegas that you may hear so much about. Chia seeds have naturally high levels of protein, vitamins, minerals and antioxidants. They are high in both soluble and insoluble fibre ~ a one-ounce serving is equal to 42% of your recommended daily fibre intake, which helps prevent blood sugar crashes and leaves you feeling fuller after eating. Chia is also a rich source of dietary minerals, such as calcium, iron, magnesium, manganese, phosphorous and zinc.

These tiny black seeds have an incredible array of uses. They can absorb up to 12 times their weight in fluids! Make a chia gel at home (one part chia to six parts water) and use it as an egg replacer in baking. Chia also makes a great replacement for pectin in jams, a thickener for soups and a binder for veggie patties. Sprinkle them on salads or grind them into a flour and sneak them into pretty much any meal for an extra hit of protein and fibre in your daily routine.