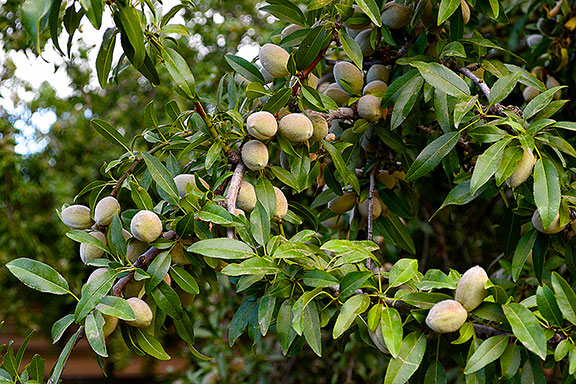 This past year continues to be one of uncertainty in many ways, from unpredictable weather to navigating pandemic complications. We’re incredibly grateful to be working with such a great group of farmers and food processors from around the world who are passionate about what they do, and keeping our food systems up and running. While unpredictable and extreme weather has had its effect on crops this year, the new crop harvest is coming along well and we’re excited to be sharing it with you soon!

Both our organic and conventional almond farmers have reported that new crop yield will be down about 10% this year compared to last. This year the hot summer temperatures with very little rain has helped with the harvest season, but has also reduced the nut size, so on average new-crop almonds will be slightly smaller this year. We still always buy the best quality grade and largest size available from the new crop! Other than slightly smaller nuts and a light yield year, our farmers are happy with how the growing season is wrapping up, despite some challenges along the way.

After a late April freeze killed off many of the pecan trees’ new leaves and buds, our grower reports that most of the trees have recovered well. Thankfully after the freeze their growing season took a turn for the better, and they had timely rains and moderate temperatures throughout the summer. They even got some heavy rains in August, which will help the trees to fill out and plump up the pecan kernels during these final weeks of growth. This is important, as many of these native pecan trees are still growing wild and are not irrigated and rely only on rainfall to sustain them.

Hazelnut crops in Canada are on schedule to be up slightly over last year’s numbers, though there have been dry spells and heat that may yet affect the final yield’s size. Our supplier reports the entire Canadian hazelnut industry is bouncing back and they’re aggressively tackling hurdles in their path to restabilizing and bring the industry back to what it was before the hazelnut blight hit over a decade ago.

This year overall the walnut crop is forecasted to be about 15% down from last year, the main reason being this past winter was colder than usual in some areas, which actually harmed certain varieties of walnut trees. Thankfully both farmers we work with did not have their orchards effected by the frosts, and they’re forecasting average crop yields this year. Interestingly though, due to a few periods of very hot weather and sunshine this summer, they’re expecting a larger percentage of darker than normal walnuts, especially the nuts that grew at the top of the tree canopy, essentially the walnuts got a summer tan! Thankfully both our farmers said they’re expecting the walnut quality to be even better this year compared to last, and they’re very happy with how things are looking so far!

The pumpkin seed harvest is about one month later than usual this year, but the good news is that we should still be receiving the new crop harvest in early November. Our farmer struggled with extreme weather throughout the growing season this year, from too much rain in the spring, higher than normal summer temperatures and unusually strong storms. They’re currently processing the beautiful dark green pumpkin seeds we’ve all come to know and love, and we’re so grateful for all their hard work to bring us the Best of the New Crop harvest!

After a summer of higher than usual temperatures and drought in much of central Canada the temperatures have recently cooled off significantly, and the rain has started again, which is delaying the hemp harvest by a few weeks. When planting the new crop this spring there were timely rains which gave the plants a strong start. Heading into the summer much of central Canada experienced high temperatures and drought; thankfully hemp loves the heat and is very drought-tolerant, so thrived despite growing conditions that had many crops struggling. Now with things cooling off and the rain returning, instead of the plants dying off and starting to naturally dry in the fields farmers are seeing new growth. This means either harvesting the product with a higher moisture content than usual, which means increased drying and processing times, or waiting until the plants give up on producing new growth and harvesting later than normal. Hemp seeds will likely be back-ordered for wholesale pre-orders, but don’t worry, we’ll cover the costs to get them to you separately from your main order if this is the case!

This year looks to be another healthy crop for persimmons, despite extreme heat and not enough rainfall throughout the growing season. While harvesting of these beautiful orange fruits has not yet begun, our farmer reports an average crop size with healthy looking trees and fruit, which they are very thankful for! We’re excited to once again bring this unique dried fruit to you this year. We love working with this small organic family farm; their passion for what they do truly shines and is reflected in the quality product we receive.

Unfortunately this year Quebec had a very early spring, which brought many perennial plants out of dormancy earlier than normal, only to get a late hard frost which badly damaged the new spring growth. Because of this the wild blueberry crop is down at least 50% from last year, which unfortunately means higher prices for this crop year.

Raisin crops are expected to be 10% to 15% larger than last year despite continued wildfire damage and drought conditions in the California area. Some of our long-standing suppliers have had several close calls, but are doing well, are producing and remain in good spirits. While they’re still looking to the skies for rain, it doesn’t appear the lack of water has impacted raisin crops, which is great news for raisin lovers!

It looks like the fig crop is going to yield about 15% short of 2020 numbers due to a July heatwave and water shortage. They are also anticipating the harvest will be comprised of smaller figs than normal due to the lack of rain. More accurate projections will become available as more of the crop is harvested in the next few weeks.