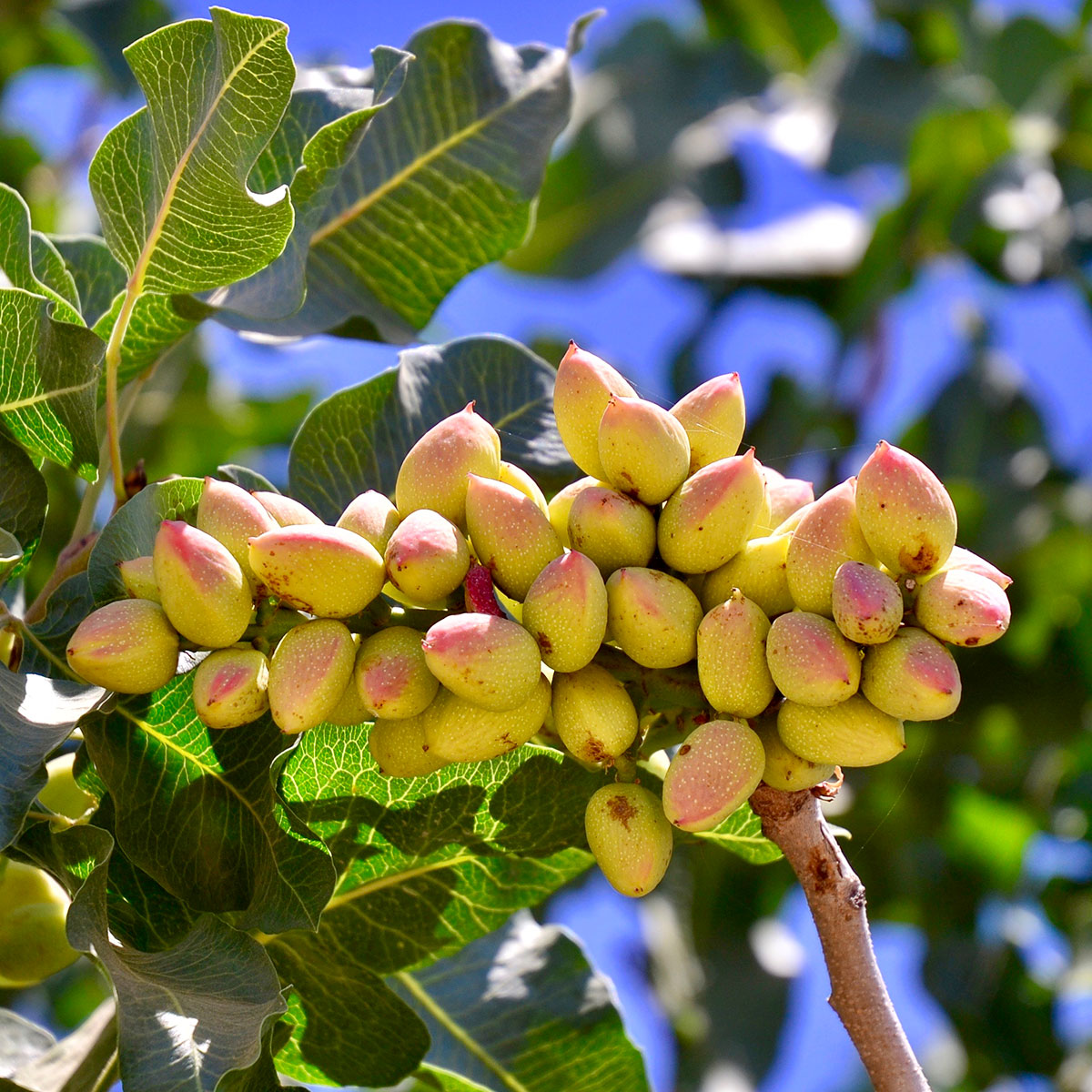 Crop news: bringing in the harvest!

Building and maintaining relationships with the farming families who grow and process our products has always been one of Rancho Vignola’s highest priorities.

Our family members have travelled the world to shake the hands of those we work with so closely, and we think this strong connection helps us to bring you the very best products available.

Here’s some seasonal crop news from the farmers and processors we visited during our early summer trip to California.

First, good news: California is officially out of its long drought status! Groundwater and aquifer levels are up, and the water situation is much improved for all growers. During the drought years, most farmers began installing more efficient irrigation systems, resulting in less water usage, which they will continue to maintain, since drought is a normal occurrence in the Golden State, as well as the unknown conditions from the continuing effects of climate change.

Organic Almonds: We were generously welcomed by Maisie Jane and her husband Isidro at their farm in Chico, California. Proud fourth-generation farmers, Maisie Jane’s operates under USDA-certified organic farming practices, using only organic fertilizers, an integrated pest management system (to balance the “good” insects against the “bad”), as well as planting local wildflowers around their orchards for the benefit of their bee pollinators and local wildlife. Water use is reduced by utilizing a water-wise irrigation system, which features solar-powered pumps.

Since almond trees are not self-pollinating, they depend heavily on bees, and Maisie Jane’s employs several practices to attract them, planting bushes and leaving large swathes of their orchard grasses uncut to create a natural habitat for beneficial insects, resulting in a healthy, balanced ecosystem. Maisie Jane’s is also very involved with the Save the Bees project and brings in local beehives to assist with the almond pollination. These hives are not freighted across the country, which means that not only does this lessen the carbon footprint, but more importantly does not stress the bees, thereby contributing to the health and vitality of the hives and preventing their susceptibility to disease.

From Maisie Jane’s: “Spread the word! More ‘buzz’ about the bee crisis will help raise awareness and make people more responsible in personal choices for their home gardens and landscaping, as well as their political choices which can also impact the future of bees.”

And a reminder, despite what the media has reported in the past, almonds are not that high on the list for water usage in California! Much of the state’s water usage is actually for livestock; alfalfa, used for animal feed, is a very water-intensive crop, as is rice.

Apricots – US and Turkish: Parts of California experienced a freeze late spring during blooming, which killed off roughly thirty per cent of the flowers. The weather has been more favourable in Turkey, but the impact from other crop failures will always have an upward effect on price.

Brazil Nuts: The crop is already in and pricing is significantly lower than last year, when Peru experienced a major crop failure. Golden berries from South America are also down in price.

Dates: The Jewel Date Company in Southern California is one of our original suppliers from the early years, before Rancho Vignola even had its company name! It was 36˚C during our mid-morning visit, and the sun was beating down on the date clusters, slowly ripening them so they will be sweet and succulent come harvest time. Company CEO Greg Raumin told us they are now giving all their orchards probiotics via their watering system.

Greg: “This increases the natural microbes in the soil, and breaks down the nutrients so the trees can better absorb them.”

The staff told us we were lucky to be there during their “cool” spell, as the temperature was predicted to rise to the mid-40s the following week! We heard later that the temperature actually hit a high of 48˚C (119˚F!). Fortunately, those Deglet, Medjool and Barhi date varieties love the heat and, barring any weather irregularities during harvesting, we will be receiving top quality fruit this season.

Canadian Hazelnuts: The future is looking promising for BC’s hazelnuts! After suffering through a severe blight which devastated the crops both here and in Oregon, BC growers are getting their first yields from new blight-resistant trees, although nowhere near enough to meet this year’s demand. Oregon is also in recovery, and we’re confident we will have an adequate supply this year with conventional hazelnuts from Oregon and the certified organic variety from Turkey.

Mangoes, Pineapple: We always enjoy visiting with Fine Dried Foods’ CEO Rusty, who has been working with and promoting small family farms all over Central and South America for decades. Rusty told us the crops are looking really healthy and that the quality so far is great! As for so many growers, the major challenge is climate change, with unpredictable weather varying from either too hot or too wet. These inconsistent conditions are definitely a challenge for farmers; fortunately, Fine Dried Foods has mango and pineapple sources all over Central America, so have many different areas to source from.

Pecans, Native Baby Halves – Organic: Our supplier informs us that pecan prices will likely increase this year due to heavy demand as more people recognize the excellent health benefits of pecans and all nuts, as well as the crop volume being “short” in the last two years. We are pleased that this year we will again have our certified organic variety, as more farmers have “signed up” for certification, thereby increasing the supply.

Pistachios – Organic: Our next visit was with Mike McCutcheon, an organic grower of pistachios, raisins, some citrus fruits and recently, also almonds. Although the 2017 season resulted in a bumper crop for conventional pistachios, it was not the same for the certified organic variety, which experienced low yields last year and a large amount of “blanks” (no nut kernels inside the shell). Since pistachios are an alternate bearing crop, this should mean a significant increase for 2018. This season is already looking good, and the trees were loaded with nuts when we visited.

California is experiencing record exports of conventional pistachios, with China absorbing about half of the total US exports. Increased consumption globally has led to increased production, and the “anti-dumping” tariff implemented by the US on imports of raw, in-shell pistachios from Iran is also welcome news for the burgeoning pistachio industry.

Raisins – Organic: Mike McCutcheon told us their raisin crop is much better than last year, when they had issues with thunderstorms during harvest, a disastrous occurrence that led to a loss of approximately thirty per cent of their crop. Currently, the yield is looking bountiful, but farmers are always cautious about any predictions before the harvest, as conditions can change abruptly! We can expect slightly higher prices for raisins, not only due to last year’s volume being down, but also because of our weak Canadian dollar. As Mike is getting closer to retirement, his son Chase is beginning to take over management. And so the family farming cycle continues!

Raisins – Conventional: Our contact at Lion Raisins was cautiously optimistic that the 2018 crop will be bountiful, since they also suffered a thirty per cent drop last year due to heavy rain during September’s harvesting. Prices will likely be higher, since last year’s supply is already almost depleted. Farmers are hoping (and praying!) that Mother Nature will be kinder and not wreak havoc during the raisin harvest!

Walnuts: We had another great visit at Mid Valley Farms with family members Billy Cassaza and his wife Elizabeth. Everything’s looking great so far, with a good amount of nuts ripening under the sunny skies.

Despite the dreadful losses experienced by so many during the disastrous wildfires further south in the state, the situation has not impacted California’s agricultural sector adversely. Climate change is bringing more humidity into the Golden State, which will no doubt continue to create changing conditions for many crops in future years.

Cashews: Vietnam is experiencing a major shortage of cashew pieces, as demand has increased on a huge scale. We’ll be monitoring the situation and will have more news when the wholesale ordering season begins (see below for order deadline!).

And last, but perhaps best of all, our building in Armstrong, BC, has undergone changes to meet the strict standards for organic certification, and we are now proud to announce we can call Rancho Vignola a certified organic facility!

Wholesale ordering season begins next week. We look forward to speaking with many of you during the upcoming season, and to bringing you “The Best of the New Crop!