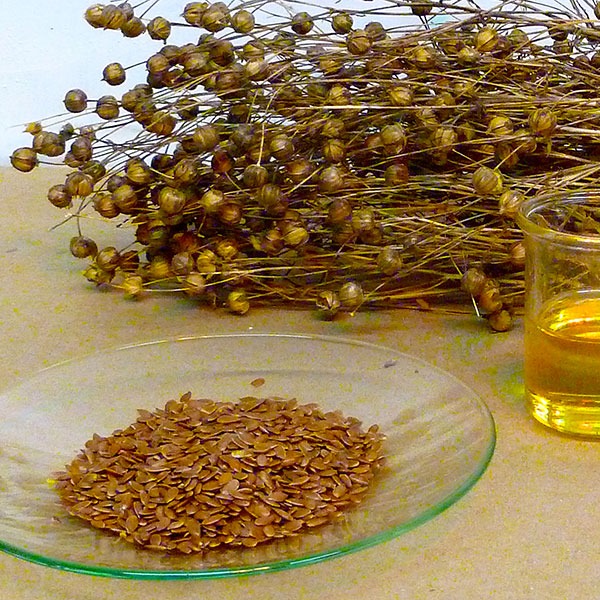 Canada is the number-one producer of flax in the world, generating over 368,000 metric tonnes annually, followed closely by China, Russia and India.

The cool and humid temperatures of various parts of North America make the flax plant an ideal crop. It is easy to grow, with the right soil and right conditions, as it doesn’t require a lot of fertilizer or pesticides.

Give it some deep loamy soil with a large proportion of organic matter and flax will flourish. It is often found growing just above the waterline in cranberry bogs.

Flax tolerates a range of soils and climates, and can be grown in almost any part of the world. It grows best in cool weather in soil prepared as if for vegetables.

Flax is typically grown for its oil and nutritional benefits as well as used as an ingredient in many wood-finishing products.

It is also often grown as an ornamental plant, its vibrant blue flowers making it an attractive addition to any garden.

The seeds of the flax plant occur in two varieties, brown and yellow (also known as golden). Most types of flax have similar nutritional characteristics and equal amounts of short-chain omega-3 fatty acids.

One of the oldest commercial oils – linseed oil – is extracted and used in a variety of commercial products such as paints and enamels.

Flax has a relatively short harvesting period – from sowing to harvest, in optimal conditions, about 100 days. A month after the plants flower and about two weeks after the seed capsule forms, the plant is harvested. Growers know it’s ready when the base of the plant begins to turn yellow. If the plants are still green, the seed will not be useful and the fibre will be underdeveloped. The fibre starts to degrade once the plants turn brown, so it’s important to harvest in the stage between green and brown.

When flax is grown for seed, the plant is allowed to mature until the seed capsules dry out and start to split. At this point a combine harvester can either cut the heads of the plants or pull up the whole plant. The pods are then fully dried to extract the seeds. Before harvesting the farm checks the amount of weeds in the straw – this determines marketability, which determines whether the farmer harvests the straw or not. When a farmer decides not to harvest the flax for the straw (fibres), they will typically burn the plants, as the flax fibres are so strong they will not decompose in one season. However, flax straw that is good enough in quality for fibre usage can be baled to build shelters for farm animals or sold as biofuel.

The seeds themselves undergo very little processing and can be eaten right from the seed pod. The seeds are often milled into flour (flax meal) – they make a great egg alternative in baking and a thickener for soups, dressings or as a quick-digest additive to smoothies, salads and basically anything else you want a power boost from. The ground seed is easier to digest than the whole kernel, but once the seed is ground and exposed to oxygen, it has a high oxidative rate and without refrigeration will go rancid quickly.

There are very few plants that have proven as useful to humanity as flax. For 30,000 years people have woven flax fibres into linen for clothing, curtains, tablecloths and blankets. The flax seed oil, also known as linseed oil, is used in paints, varnishes and enamels. For centuries the oil has been used to protect furniture, and the fibres have been woven into strong rope and twine. From food to medicine, fine linen paper and durable floor coverings, flax has woven itself into the fabric of our lives for many millennia.

The ancient Egyptians grew flax along the Nile and wrapped their mummies in the linen fabrics. Temple walls of ancient Egypt were inscribed with paintings of flowering flax. The Book of Exodus in the Bible makes note of the cultivation of flax and forbids the blending of flax with “impure” wool. Though the Romans and Greeks preferred woolen fabrics and didn’t cultivate much flax, Roman emperors were known to import linen fabrics from as far away as Egypt, Babylonia, Germany and Spain, and used it to make sails. The Greeks also used flax for food during this period.

When the Roman Empire declined, flax cultivation went with it, at least until the eighth century when Charlemagne declared flax more sanitary than wool and ordered his French subjects to cultivate it. Linen is much easier to launder than wool. With this, European production exploded and the use of the versatile plant expanded exponentially. The medieval herbalist Bartholomew considered flax the most beneficial of all herbs and listed dozens of uses, including fishnets, thread, bowstrings, matches and even ships’ caulking.

Colonists brought flax to North America, and it flourished. By the early twentieth century, cheap cotton and rising farm wages had caused production of flax to become concentrated in Northern Russia. Now Canada, Russia and the Ukraine are the world’s top producers and exporters of flax – for seed or for fibres.

Examining ancient history, it is easy to see the value of a product when it is reflected in the folklore surrounding it. In the case of flax, it was believed to be a blessed plant, one that bore good fortune, restored health and protected against witchcraft. To the ancient Egyptians, white linen was a symbol of divine light and purity, brought to them by the mother goddess Isis.

The Norse goddess Huldah was known as the Guardian of the Flax Fields, mostly in part because it was she who taught mortals the art of spinning and weaving. It was believed that no evil witchcraft could be practised in a flax field – only good magic.

In Germany, folklore associated flax with luck. A German bride of the time would put a few flax seeds in her shoes to protect her fortune and she often tied a flaxen string around her left leg to make her marriage thrive.

A one-tablespoon portion of ground flaxseed contains about 37 calories, three grams of fat and 2.5 grams of protein. Flax contains high levels of protein, dietary fibre, several B vitamins and dietary minerals, such as thiamine, magnesium and phosphorous. Flax seeds are also a great source of omega-3, omega-6 and omega-9 fatty acids, saturated fats and palmitic acid. You can literally add ground flax to anything if you need more fibre and protein in your diet. Try throwing a tablespoon of flax meal into your morning smoothie or in with your scrambled eggs!