From the archives: Brazil nuts

In 2012, Richard Vignola made an epic trip into the depths of the Amazon jungle to see what the Brazil nut harvest looked like. What an adventure he had. A journey never to be forgotten.

Brazil nuts are fascinating! Not only because they are such a large nut, but they also only grow in the Amazon rainforest and cannot be farmed. There is no such thing as a Brazil nut grove or orchard. The symbiosis between the Brazil nut trees and the Amazon is unbreakable, because of one little creature called an agouti. Check out this short video about why the agouti and the Brazil nut tree need each other to survive.

Brazil nut trees can reach more than 50 metres tall and live for more than a thousand years. Brazil nuts are very high in selenium and therefore a little goes a long way. Selenium is a trace mineral that our bodies need a wee bit of, often. Basically, selenium helps our bodies to regulate hormone production in our thyroid and also helps to protect our cells from free-radical damage. A few Brazil nuts easily fulfills our body’s need for selenium on a regular basis.

Richard was lucky enough to travel up the Amazon with some of the castañaros during peak season of the Brazil nut harvest! Here are a few excerpts from his travel log:

“Hernan grabs his harvest equipment: a simple woven reed basket with shoulder straps and his pod picker, a bamboo stick split four ways and flared at one end for gathering the castañas pods from the forest floor. I am handed a plastic hard hat as we get up and follow Hernan down the path. Although Candela Peru provides hard hats for all the castañaros, no one wears them; however, I for one do not want to have one of these castañas pods fall on my head! A one-kilo pod dropping from 100 feet or more can definitely be lethal.

“Making our way over fallen trees and other obstacles, we stop in front of a very large tree, perhaps a metre in diameter, with a uniform tight bark; I am meeting my very first castañas tree! Gazing up, it is difficult to see the canopy as it towers above the surrounding trees.

“Cirilo points to the ground which is littered with dark seed pods, each about 6 inches in diameter. Hernan gets busy picking them up with the flared end of his bamboo picker and flicking them into his basket as I walk around marvelling at this giant tree and taking photos of its fallen seeds. After a short while, Cirilo points up to the sky and then to his head, reminding me that this is not a good place to linger. Perhaps because of their reluctance to wear head protection, castañaros are always aware of the possibility of falling castañas pods ~ if you happen to be standing in the wrong spot, it’s lights out for you!

“We walk back to the main path, where Hernan dumps the contents of his basket on the ground. We re-enter the forest down another small path, and reach a second castañas tree. This one is smaller, but the ground around the base for about 15 feet out is peppered with small coconut-sized castañas pods. Hernan quickly fills another basketful and we head back out to the main path, adding our loot to the first pile. Hernan crouches down beside the mound and, holding a pod with one hand, proceeds to hack at it with his two-foot long machete, cutting a groove around the top. A few precise strikes later and, voila! ~ he now holds the open pod filled with about 15 precious castañas, each nut still protected by its hard dark brown shell. He dumps the individual nuts into a sack and discards the empty pod. This process is repeated until the large sack is full, which takes about four hours. The bag is sewn closed with a very large needle and string, and is then ready to be transported back to camp.

“When the castañas finally make their way down the river from the harvest camps their moisture content can be as high as 38%, making them unstable and susceptible to mould contamination. Many countries, including Canada, are very diligent in their requirements for ensuring that Amazonian nuts entering the country contain no mould residues, especially aflatoxins. Candela Peru has been very active in developing processing technologies to eliminate this problem.

“The process used at Candela involves a multi-step drying method, visual sorting and laboratory analysis to ensure the safety of the nuts. The in-shell castañas arriving at the local processing plant are first laid out in a large open room for five to six days, regularly turned and raked into long furrows. This natural air-drying process brings the moisture content down significantly. They are then transferred to large heated tumblers: huge perforated cylinders, five feet in diameter and about 40 feet in length, with a large fan at one end that blows warm air through the cylinder. The tumbler drying process takes about 35 hours; the air temperature is increased very gradually, then incrementally decreased over a three- to four-hour time period. 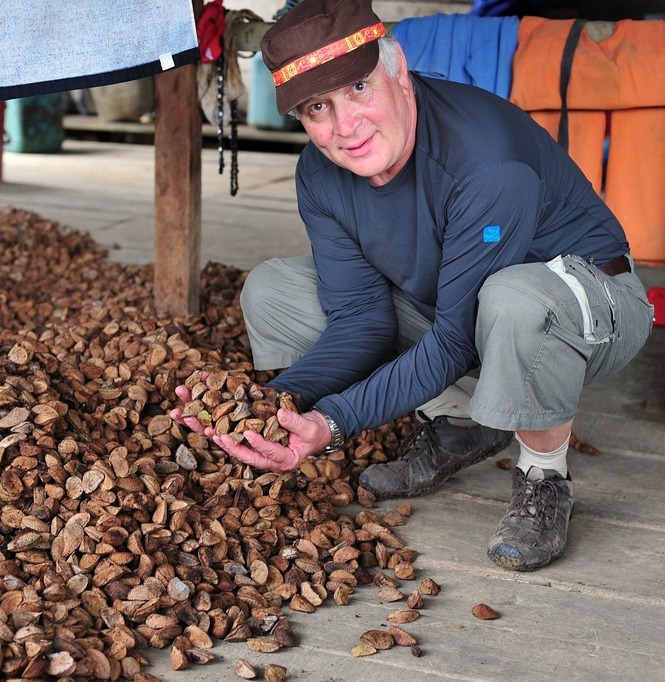 “After the tumblers, the nuts are allowed to rest for two to three days. Next, they are placed in a sealed steam oven for about 30 seconds and then sprayed with cold water, which loosens the nut meats from their tight shells. The castañas are now ready for shelling, which is done by hand with manually-operated nut crackers. After shelling, the nuts are hand-sorted, with broken and chipped ones going to oil production. They are then put through another drying process, this time laid out on large stacks of screened trays. Gradual heat is applied over a 20-hour period. Again the nuts are cooled down and put into a large vat where a strong air-flow is applied. These numerous steps bring the moisture content down to 3% to 4%, and the nuts are then ready to be shipped to Candela’s plant in Lima.”

Richard’s adventures were fascinating to read about, and to think how many people handle the Brazil nuts before they are even shipped to us in Canada was boggling to consider. Candela Peru works with closely with the casteñero families in Peru to encourage fair trade practices that help sustain a traditional method of harvesting.

Check out some of the other initiatives Candela Peru is involved in at their website www.candelaperu.net.