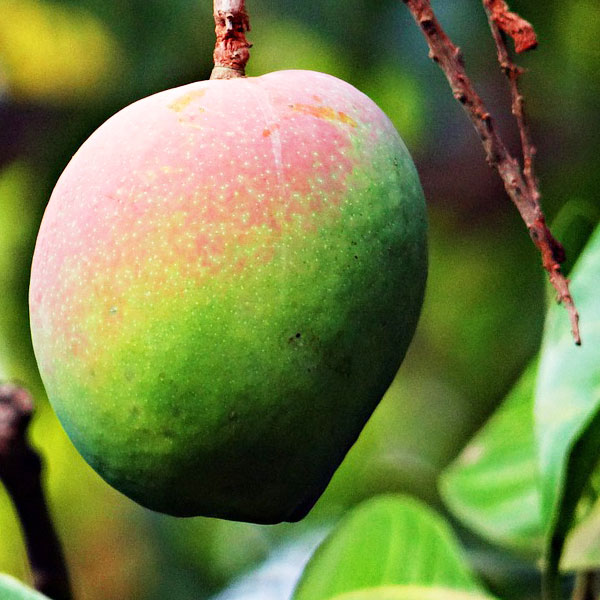 Mangoes: Rancho’s product of the month

With Christmas just around the corner, the days are becoming full of bright lights and bold colours, so it’s only fitting that our product of the month for December also stands out, not only by colour but also by taste.

While mangoes don’t necessarily make us think of singing carols or roasting chestnuts, they are certainly enjoyed year-round by millions worldwide.

I’m not kidding when I say that mangoes are a global phenomenon! Mangoes are grown on every continent, excluding Antarctica, and there are more than 1,000 varieties!

In general, ripe mangoes have a sweet, bold flavour; however, this can vary across cultivars. The texture may also vary. Some mangoes may have a soft, pulpy texture, while others may be firmer with a texture similar to an avocado or cantaloupe. Mangoes may also be fibrous and when dried become slightly chewy. The skin of mangoes can be eaten unripe, cooked or pickled; however, certain people may find that eating the skin results in contact dermatitis of the lips, gums or tongue.

Mangoes can be enjoyed in a multitude of different ways! Unripe mangoes are often used as an ingredient in chutneys or pickled, and can also be eaten raw with salt, chilli or soy sauce. Ripe mangoes are often eaten as is, fresh or dried, or used in jams or preserves, juices, smoothies and fruit bars. Mangoes are also incorporated in many unique culinary dishes from around the world. In Hawaii, ripe mangoes are often served charred. In South Asia, a popular drink called mango lassi contains mango pulp, buttermilk and sugar. In Central America, green mangoes are mixed with salt, vinegar, black pepper and hot sauce. Lastly, unripe mango is often mixed with bagoong (fermented fish), fish sauce, vinegar and soy sauce in the Philippines.

When storing dried mangoes it is essential that they are stored in an airtight container in the refrigerator or a cool location such as a dark pantry. Dried mangoes are also safe to be frozen. 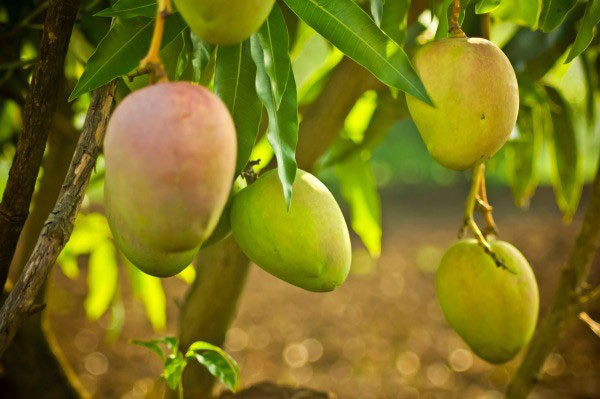 The first references to the mango occurred around 4,000 BC in Hindu writings. These passages describe a scene in which Lord Ganesha holds a perfectly ripe mango in his hand as a sign of prosperity and attainment. According to historical legends, it is often thought that Buddhist monks were the first to grow mangoes, as they believed that the Buddha himself meditated underneath the shade of a mango tree. Whether this is true or not, the first occurrence of mango as a cultivated crop in modern history is credited to the Mughal Emperor Akbar (1556-1605), who is said to have planted a mango orchard of approximately 100,000 trees in Darbhanga, Eastern India. For some time mangoes were solely grown and harvested in India, though it is thought that Hsiian-Tsang, a Chinese Buddhist monk, was the first person to bring the mango to the notice of people outside of India.

Mango seeds are unable to travel by wind or by most animals due to their size and weight, so it can be assumed that any movement of the fruit from one region to another is a result of seeds being transported by humans. Records show that mangoes made their first international move when Persian traders carried mangoes with them during their travels across western Asia, and then planted the seeds in East Africa. Portuguese explorers, having discovered the mangoes in India, introduced the fruit to Brazil some time during the sixteenth century. After this, mangoes were introduced to the Americas, including Mexico, before proceeding to more remote areas such as the Caribbean, and in 1742 the first mango seed was planted in Barbados.

Today, most mangoes (there are more than 1,000 cultivars!) are grown in frost-free tropical and subtropical climates. Almost half of the world’s mangoes are grown in India, but India’s population consumes just as much as they grow! The second-largest source of mangoes is grown in China, while Spain is the sole location in Europe with a climate warm enough to support the growth of the fruit. In North America mangoes are grown in only three locations, all of which are within the United States: Florida, the Coachella Valley in California, and Hawaii. Other locations in which mangoes are cultivated include southern, western and central Africa, Australia, South Korea, Pakistan and south-east Asia. Furthermore, Rancho Vignola’s ultra-popular dried organic mango comes from a supplier located in Mexico, and our sweetened, sliced, conventional dried mango travels all the way from Thailand to be delivered to our facility here in Armstrong, BC. 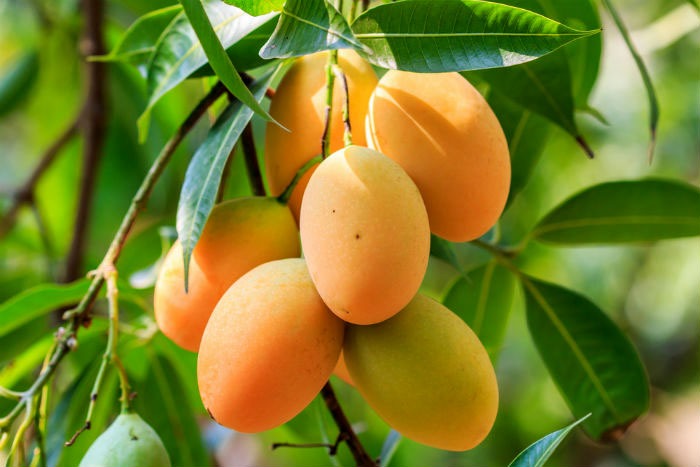 A mango is technically a drupe, and therefore belongs to the same family as cashews and pistachios. In mango orchards, different cultivars are often grown together in order to improve the quality of the yield, though in some cases only specific varieties of mangoes can grow in certain areas. Currently, the most popular cultivar of mango is the “Tommy Atkins” variety, as it said to have excellent productivity, disease resistance, shelf life, transportability, size and an appealing colour. While some varieties of mango trees can self-pollinate, many trees rely on wind, butterflies and moths to spread pollen from tree to tree. Mango trees can grow to a height of over 40 metres tall and their roots can reach a depth of eight feet. Mango trees can produce flowers from December to March, and once pollinated produce what is called a “true fruit.” A true fruit is one that develops from the ovary after fertilization occurs.

Mango trees experience four stages of growth: seedling, vegetative, reproductive and maturity. During the seedling stage (sprout, one year), the trees only grow leaves and woody tissue, and require more water relative to size than the larger stages of growth. The vegetative stage (years two to five) occurs when the tree begins to produce scaffolding and its general form, and can be identified by the appearance of bare stems. Mango trees enter the reproductive stage when they are older than five years but less than 10 years of age, and produce flowers and fruit every year for the first half of this stage. For the remainder of the reproductive stage flowers and fruit are produced by mango trees every alternate year. Lastly, the maturity stage, which takes place when the tree has exceeded an age of ten years, is identified by a large increase in the number of fruit produced by the tree during a particular season, followed by a year or two in which the tree will not produce any fruit at all.

Harvesting mangoes is time-consuming and requires a large amount of manual labour, as they are often hand-picked. Commercial orchards may use machinery to aid in this process. After harvest, much care must be taken in transporting the fruit, as mangoes are prone to bruise easily or may ripen too quickly. Mango that is meant to be eaten by consumers in a dehydrated form is skinned and then sliced or diced in order to ensure even drying. The mango slices are then placed in a dehydrating machine, which will remove the water from the fruit by maintaining a relatively low heat over a long duration of time. Afterwards, it’s time to enjoy!

It’s plain to see that the popularity of the mangoes will not decrease for some time. Having been embraced by so many regions and different culinary styles, it would not be surprising to see the emergence of new dishes that feature mango, or the creation of even more cultivars! Whether you prefer them fresh or dried, ripe or unripe, historical evidence has proven that the mango has incredible staying power and adaptability, and is sure to stick around for many more years to come.

Here are a couple of ingenious ways to incorporate dried mango into your daily diet!