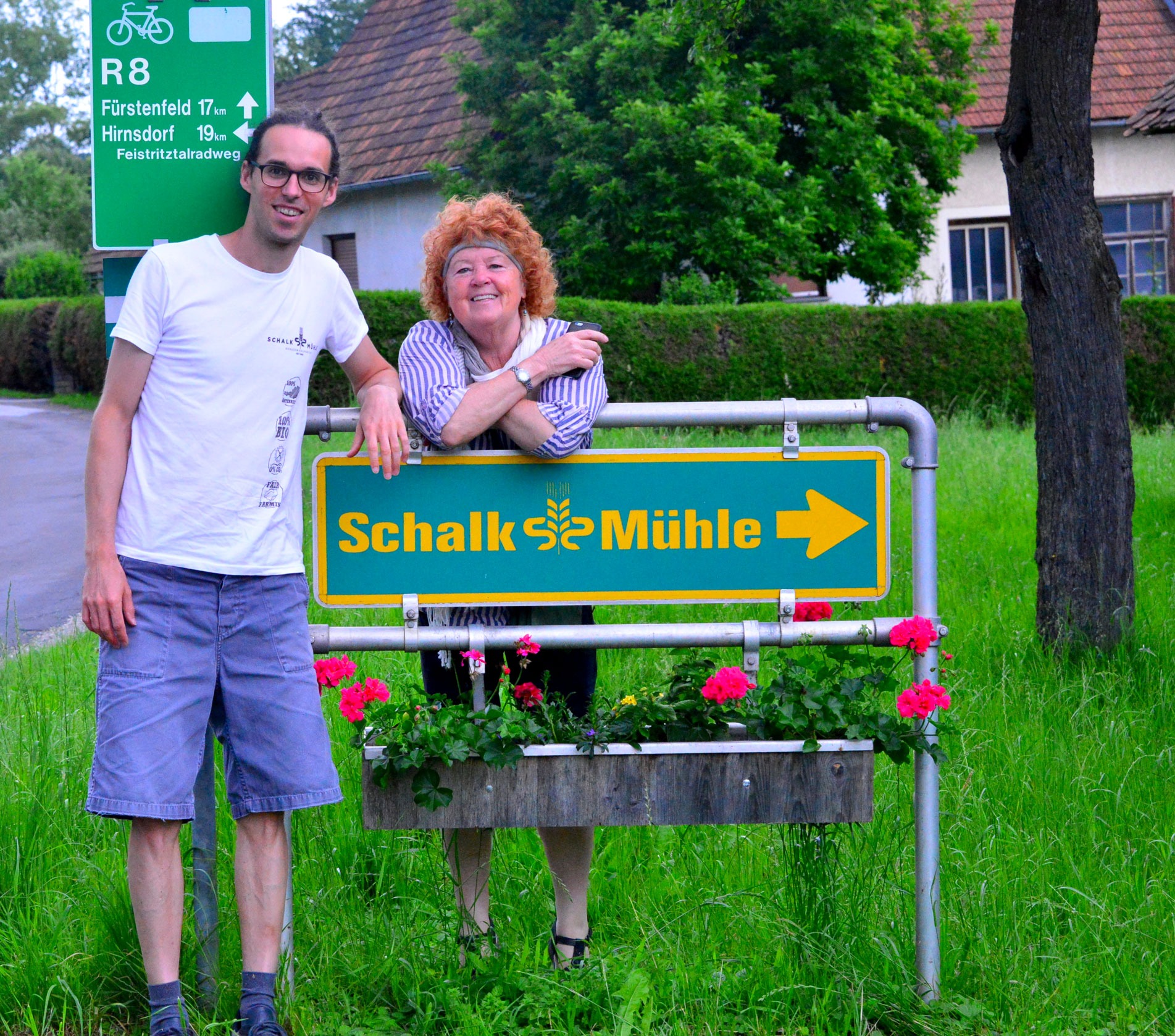 Pandering to pumpkins! A visit to Schalk Mühle, Styria, Austria 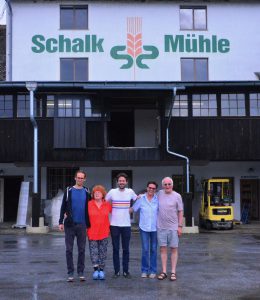 The soil appears baked dry under the relentless sun, but even with no rain in the forecast for this area of Austria – Styria – the farmer we’re visiting seems optimistic for a good harvest! This region is famous for its Styrian pumpkin seeds, which is a sturdy crop with few predators, and fortunately somewhat drought resistant. We are here in Austria visiting Schalk Mühle, the third generation farm and mill which produces and processes the dark green pumpkin seeds we bring to you each fall.

Mühle is German for mill, and the mill itself was first historically documented as far back as 1542! In 1859, the mill and surrounding land was purchased by family ancestor Franz Schalk, and the Schalk family have been living at the family homestead and running the business ever since.  In 1950, the Schalk’s built a pumpkin seed oil press and began producing the region’s Styrian Pumpkin Seed Oil. This oil, a rich dark green, is highly nutritious and widely used in the region’s cuisine. Bottled in glass for the European market, Schalk Mühle is currently experimenting with dark plastic containers for the north American market.

With their father recently retired, Rainer Schalk and his brother Franz are now overseeing the business, although their mother is still very much involved as the book-keeper. Rainer Schalk, who functions as Schalk Mühle’s CEO, picked us up at our hotel in Vienna in his small but thankfully cool car. Since Vienna was suffering through a sweltering heatwave and the hotel’s air conditioning system had been broken the entire time, this was a welcome respite!

Our drive first took us north about 17 km to visit one of Schalk’s farmers. Farmer Max, with his wife and young family, are farming Styrian pumpkins and other crops organically on one hundred acres of land. The pumpkins were in full leaf in the field we visited, although the yield was a bit sporadic in those early weeks with no rain. The Styrian type of pumpkin is smaller than the large, orange variety so widely known in the U.S. and Canada, and produces dark green, shell-less seeds, making the production of pumpkin seed oil that much easier! The pumpkin flesh is treated like fertilizer and mostly left in the field to break down.

After a taste of unpasteurized milk from Max’s family cow (they have a loyal group of customers who have to be registered ‘farm members’ in order to buy his milk legally,) and a visit to the nearby building site where they are constructing their new home, we headed south. A drive of an hour or so brought us to the land of a farmer named Herbert, waiting for us on the dirt road adjacent to his land. Herbert grows a diversity of crops on his 550 acres, including lentils and chickpeas, but his main crops are pumpkin, sunflower and flax seeds. This farmer also leases part of his land to a utility company for windmills, one of which was being erected during our visit (they’re quite massive up close!)

While Herbert and Rainer surveyed the fields, engaged in earnest discussions, Richard and I wandered to the edge of the field where the ‘false’ flax seeds were growing. This crop, the ‘Calamina microcarpa,’ with white flowers instead of the flax’s more common blue blossoms, is native to Europe, and its seeds are used only for culinary oil.

Come in… and Wilkommen!

Many of the local farmers produce their own packaged products, some of which are sold online, and are also featured in their local ‘open door’ store located in the nearby village. Based on the honour system, participating farmers stock their wares like a regular store, with refrigeration for the cheeses & spreads. Customers enter through the open door, decide on their purchases, and check themselves out through a unique electronic system which keeps track of each of the farmer’s inventory, and credits their account accordingly. They have experienced no thefts since the store has been in place! We remarked how wonderful it would be to have such a store concept in our Armstrong building!

Over lunch Rainer told us more about his family business. Schalk Mühle are experimenting with a diversity of crops including lentils, chickpeas, soya beans, plus the aforementioned false flax, poppy seeds (again, mostly for oil,) potatoes, and wheat. As we drove towards the village of Kalsdorf where the family business is located, Rainer proudly pointed out various small plots of land where a variety of crops were growing.

While farming themselves, Schalk Mühle also purchases seeds and other crops from over two hundred farmers throughout Austria. Rainer sees his role with these farmers as a partnership; as he ensures he negotiates the best deals for both his own business as well as the farmers. Rainer: ‘If they’re not successful, we won’t be either!’ Schalk Mühle was recently granted an award for diversity in the work place, in recognition of their commitment to hire refugees and migrants.

Arriving back at Kalsdorf, where the rain is much more frequent, our tour of the Schalk Mühle farm began. Rainer told us they operate their own hydro-electric plant, utilizing water from the gushing creek which runs through their property. Firewood is obtained from their own forest. It was interesting to see that they have retained one floor of their building as a sort of museum, a spotless environment featuring some of their former equipment, now regarded as antiques!

Donning hairnets, we stepped into the very warm oil pressing room, observing how the press shapes the ground pumpkin seeds into round, flat cakes after extracting the rich, green oil. Waving goodbye to the lone operator we left the noisy grinding room.

As we crossed the yard I noticed a large white house which, upon enquiry, turned out to be the Schalk family home. Boasting thirteen rooms, the Schalk offspring were raised there; in fact Rainer and his girlfriend are currently living there again, temporarily he assures us with a grin!

Rainer Schalk travels regularly to America and Canada, as well as throughout Europe, attending trade shows to promote not only Schalk Mühle pumpkin seeds, but also the other products they produce. With the valuable nutrients pumpkin seeds contain, and their high mineral and plant-based protein, they are the perfect supplement for a wholesome, healthy diet. Included in their selection of products are protein powders; toasted and raw pumpkin seeds; pesto featuring sunflower seeds as well as hemp and pumpkin; a variety of oils including not only pumpkin seed oil but also Camalina (false flax) which is extremely high in Omega 3 fatty acids, mustard seed, and hemp oils, all produced organically. They also produce organic butters from their pumpkin, sunflower and hemp seeds! All products which are widely consumed in Austria, but which are just beginning to be discovered in the north American market.

We’re looking forward to receiving this fall’s shipment of tasty, nutritious pumpkin seeds from our good friends at Schalk Mühle, and wish them and their farmers a Happy Harvest!

2 comments for Pandering to pumpkins! A visit to Schalk Mühle, Styria, Austria