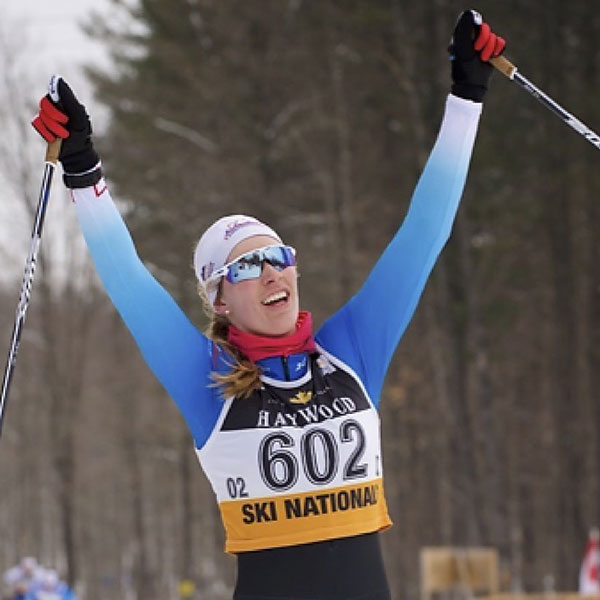 Another season has come to an end, a season filled with highs, some lows, new adventures and lots of things to keep working on. Amidst all the travel and changing scenery, one thing remained constant: I always ran out of dried peaches before the end of my trips.

The second half of the season went by like a whirlwind. After some exciting World Cup racing in January, finishing sixteenth in Dresden, Germany, February brought another season highlight, when I finally qualified for the heats at the World Cup in Lahti, Finland. After three previous times sprinting in Lahti and getting a bit closer to the heats each try, I was very happy to be able to execute a very good qualifier and ski well in the quarter final to finish twenty-fourth.

Skiing to twenty-fourth at the World Cup in Lahti, Finland.

At the end of February, I competed at my second World Championships. This year, the World Championships were in Seefeld, Austria. The venue and fans made for an amazing atmosphere, with the stadium nestled beneath the beautiful mountain backdrop.

The relay at World Championships was the highlight for me. I skied the anchor leg and was able to move the team up from fourteenth up two places to finish twelfth.I was able to push the whole race and dig deep mentally. I knew when I crossed the line, after sprinting the last kilometre to pass the Polish team 200 metres before the finish, that I had given my all for Canada that day. Looking at the results later, and seeing that I had skied the sixth-fastest time on my leg, left me with a smile.

After World Championships, I had the chance to come home after two-and-a-half months of racing and training in Europe. The mental and physical reset was much needed, as well as the chance to restock my snack stores before the final month of racing kicked off in North America.

These are a few of my favourite Rancho Vignola travel snacks that keep me going while I’m away racing in Europe and across North America:

The final month of racing started with Canadian National Championships at Nakkertok Nordic. The week brought some fun racing and another national title, which is always something to be proud of. It was also filled with many opportunities to interact with the younger Canadian club athletes. It is very inspiring and motivating to see the drive and determination of these young athletes.

Following Nationals, the final World Cups of the season were also on home soil; they were a perfect way to cap off a busy World Cup season and to celebrate the retirement of Alex Harvey and Lenny Valjas. The atmosphere in Quebec City was electrifying and the crowd was full of emotion as they watched Alex win a silver medal in the final race of his career. Lenny and Alex have both been great mentors, role models and friends, and it will be very different next season without them there.

My season wrapped up at the Super Tour finals in Presque Isle, Maine. It was really gratifying to be able to fight hard and finish the season with two really good races in Presque Isle. With a fourth place in the sprint and a third place in the 10-kilometre classic mass start, both races brought some very competitive racing opportunities and tightly fought battles from start to finish. I went to the Super Tour Finals looking for some fun racing to end the season and the chance to push myself the entire race, against skiers of very similar ability. I found just that and a bit more: my first Super Tour distance podium, finishing behind two Americans who are both top-10 World Cup skiers, was probably my best distance race of the season and my best classic distance race in many years!

First day back to training – snacking on Rancho Vignola’s Deluxe Nut Mix mid-workout, during a 3.5-hour road bike along the Oregon coast on May 1.

Although I did not achieve all of my goals for the season, this was my best season yet. Now after a month off from scheduled training, I am rejuvenated and ready to get back to work on all the goals I have set for the upcoming racing season. April brought some time spent at home in Whitehorse, in British Columbia and on a road trip down the Washington and Oregon coasts. After a winter on the road, I am looking forward to getting back into my kitchen and spending some time cooking up all sorts of recipes to help me recover from the hard summer workouts.

Here are a few things on my spring cooking list:

Spring skiing at Sovereign Lake Nordic in early May!