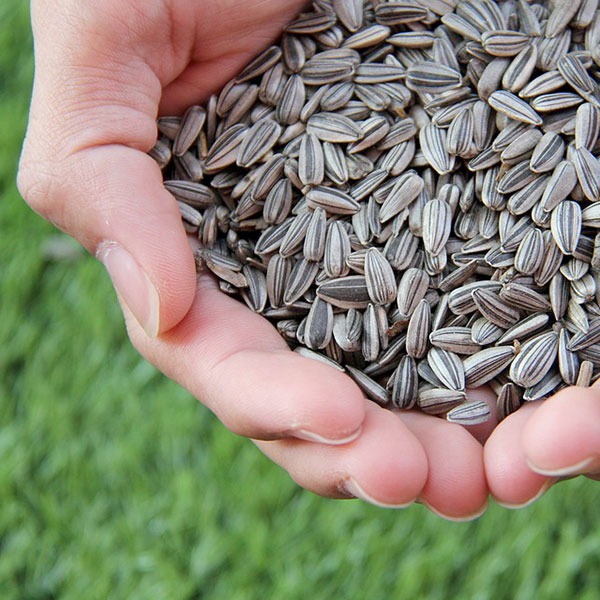 Golden, sun-kissed and vibrant are words that are not commonly used to describe the month of November, which is why we here at Rancho thought it was only fitting to provide you with a little relief from the dreary grey of fall in the form of our product of the month: sunflower seeds!

The ultimate snack food, the number of nutrients packed inside these little kernels is vast.

Whether you prefer them raw or roasted, sunflower seeds are a fantastic source of protein, dietary fibre, B vitamins, vitamin E and dietary minerals.

Feeling stressed? Chow down on a handful of sunflower seeds! The kernels contain folate, also known as folic acid, which research shows can affect noradrenaline and serotonin receptors within the brain, which is similar to the way some antidepressants work.

When it comes to the culinary world, sunflower seeds can be added to a number of different dishes, and are especially popular as a street food in the Mediterranean, Eastern Europe and Asia. With their crunchy texture and nutty, rich flavour, sunflower seeds make the perfect addition to salads, granolas, breads and other baked goods. When pressed, sunflower seeds produce an oil that is commonly used for frying and sautéeing or the oil can be further processed into polyunsaturated margarines. Additionally, sunflower seed butter has gained in popularity in recent years as a substitute for those who are allergic to peanuts and are unable to consume peanut butter. 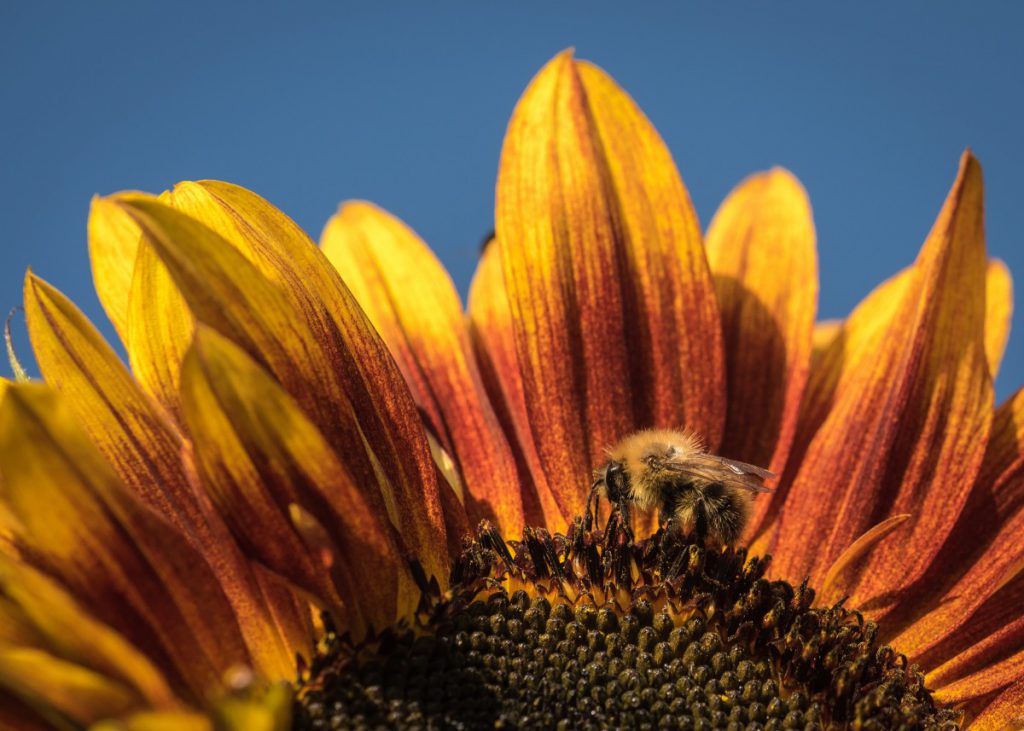 Believe it or not, the sunflower seed is a seasoned world traveller! From precolonial America to Tsarist Russia, the sunflower seed has been there and back, and there again! Native to North America, sunflower seeds were first discovered by hunters and gatherers around 3,000 BC, in a region that we know today as Arizona and New Mexico. Historians suggest that sunflower seeds were domesticated by the Cherokee and other Native American tribes before corn or other traditional crops such as squash and beans, and that their growing efforts helped transform the sunflower into the single-headed plant that we’re all familiar with today.

In 1500, sunflower seeds made their first voyage when transported to Europe by Spanish explorers. Upon arrival, the plant itself grew in popularity at an accelerating rate, though it was mainly grown for ornamental purposes, as the flowers were viewed by Europeans as exotic and rare. It wasn’t until much later that sunflower seeds were acknowledged for their nutritional value.

By the eighteenth century sunflower seeds had begun to gain in popularity as a cultivated plant. Peter the Great, the Tsar of Russia at the time, first came upon sunflowers and sunflower seeds while visiting Holland and brought the seeds back to Russia. It only took a short period of time for the people of Russia to embrace sunflower seeds as an integral part of their diet. The Russian Orthodox Church had banned the consumption of all oils during Lent, yet to the delight of the Russian public an exception was made for sunflower oil, stimulating the demand for the seeds.

By the third decade of the nineteenth century, sunflower oil was being produced in Russia on a large, commercial sale and research efforts funded by the government had helped Russian scientists identify two varieties of sunflower. The first was specifically grown for oil production, while the second was intended for snacking purposes. It was also during this time that Russian immigrants began to move their families to North America, and along with the few possessions they brought with them were sunflower seeds.

At first Canadians and Americans were wary of the economic uncertainty of investing in a new crop, and the sunflower seeds that were grown and harvested were used as silage feed for chickens and nothing more. However, this attitude quickly changed and as the demand for the seeds grew, so did the size and number of sunflower crops. In the 1880s Canadian and American sunflower seed growers began to advertise “Mammoth Russian” seeds in their catalogues – a variety that was sold in the United States until the 1970s.

A hundred years later, in the 1980s, European demand for sunflower oil grew exponentially as health fads began denouncing cholesterol, warning consumers of its effect on their hearts. Once again, as it had done so many times before, the sunflower seed was on the move and was sent to Europe in order to curb some of this demand. 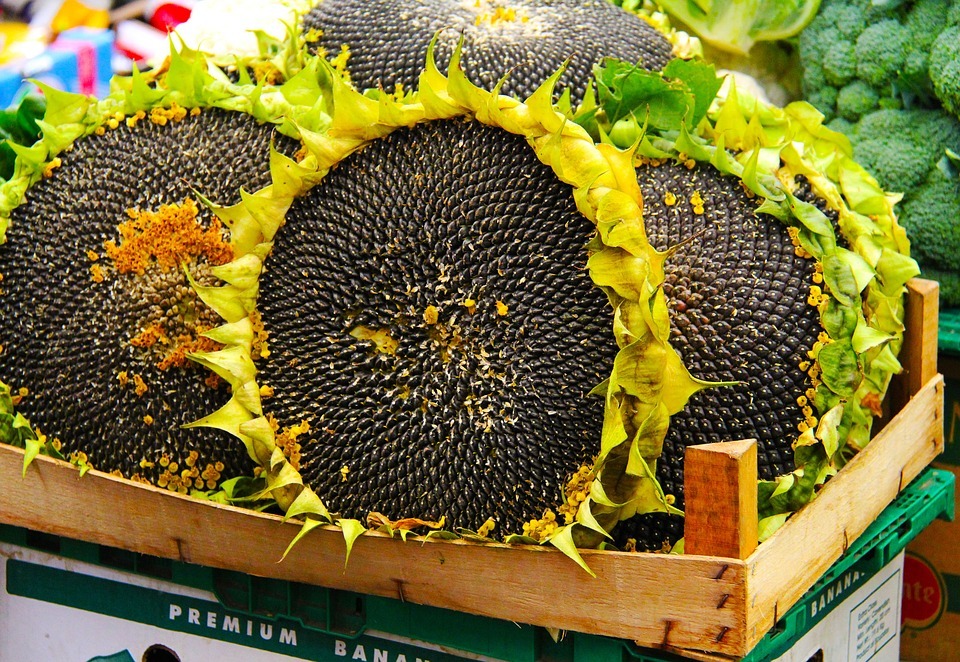 Sunflower seeds are technically the fruit of the sunflower, and there are three varieties: linoeic, high oleic and NuSun. Each variety has its own unique level of monounsaturated, saturated and polyunsaturated fats, and are classified by the appearance of their seed husk. Black husk sunflower seeds, like those of the NuSun variety, are intended to be used in sunflower oil production, while those with striped husks are intended to be confectionery seeds. Despite its name, the sunflower seed is actually classified as a cypsela when the husk is still present. Once hulled, the seeds are referred to as kernels or hearts.

As of 2014, global production of sunflower seeds was estimated at 41.4 million tonnes, with Ukraine and Russia producing nearly half of that amount. The growing season for sunflower seeds begins in early spring when the seeds are planted. It is critical that some space is left between the seedlings when planting, as seedlings that are crowded are prone to produce much smaller kernels than what is usually desired by farmers. Sunflowers should be planted in a north-to-south direction, and should be watered routinely in order to ensure that the soil maintains an adequate moisture level.

Sunflowers are ready to harvest once the back part of their heads turns brown, which usually occurs sometime in the month of September or early October. The heads must be fairly dry in order for efficient harvesting to take place, and harvesting must be completed in a timely manner in order to minimize seed losses due to birds and disease. Once harvested, the seeds must first be dried to a level of 10 per cent moisture before they can be further processed. Having been effectively dried, the seeds can then be placed onto wire screens that shake the seeds, removing dirt and debris from their shells. Afterwards, the seeds are sorted by size, with the largest being selected for snack foods, the second largest for baking needs and the smallest for bird or pet food. Quality control is performed on a routine basis, during each step of processing.

In recent years, research efforts have been made in order to produce sunflower seed crops that produce a greater yield per acre, grow faster, are more tolerant to disease and pests, and produce seeds with a superior taste. Innovation has also allowed for the reuse of sunflower seed hulls/shells after the removal of sunflower kernels.

Sunflower seed hulls contain allelopathic compounds that are toxic to grasses and a wide variety of cultivated garden plants. As such, this makes them excellent weed suppressants and an environmentally-friendly alternative to chemical weed removers.

Hulls are also used as an environmentally-friendly alternative to wood when it comes to creating heat and energy. Hulls have a heat value of 19.2 megajoules per kilogram and are often pressed into fuel logs with other wood waste products. Sunflower seed shells are also often ground and mixed into animal feed or incorporated into wood panelling for construction purposes.

Furthermore, scientific endeavours have also resulted in the progress of developing sunflower seed oil into biofuel. Sunflowers produce more oil than other common oil crops such as canola or soybeans, and farmers possess well-established agronomic practices that are already in place in many regions, thus making it fairly simple, in theory, to promote and grow a consumer market for sunflower seed oil biofuel. Furthermore, scientists hypothesize that sunflower oil has the potential to offset petroleum diesel use, especially at the farm scale.

Could it be that 25 years from now we’ll be filling our cars with sunflower oil? While the future is unclear, we know for certain that sunflower seeds have staying power and the ability to appeal to different demographics. This, in combination with the nutritional benefits that they provide, and the possibility of additional uses, suggests that the popularity of sunflower seeds will continue to grow for many years.

Looking for some new ways to incorporate more sunflower seeds into your diet? Check out these delicious recipes:

Start your day off right with these Pumpkin, Cottage Cheese and Nut Pancakes.

It’s getting cold out there! Warm up with this recipe for Stuffed Winter Squash.