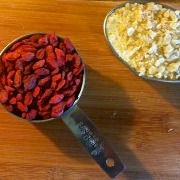 I have so many tomatoes in my garden this year. I have dehydrated, canned, frozen, made sauce, made more sauce and eaten so many! I wanted to do something different with a few pounds of them before I just started giving them all away! Something that I had never made, but that I thought would really enhance my winter collection of canned goods. I settled on making a chutney! My love of hot curries, stinky cheese and roasted veggies make having chutney around in the winter a real treat. So I searched for the right recipe online. Here in the Okanagan, apples in September are NOT hard to find. In fact, there are so many types of apples that the hard part is figuring out which ones will taste right with which recipe. I found a recipe at AllRecipes.ca that I thought would be perfect for my existing ingredients, though I am physically unable to leave a recipe alone. I just had to change it a teeny bit.

Here is the original ingredient list with my changes in brackets: 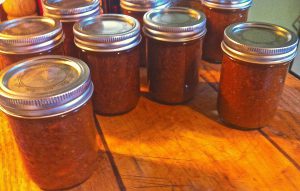 This recipe is a special treat to serve with rich curries, cheese and nice bread.