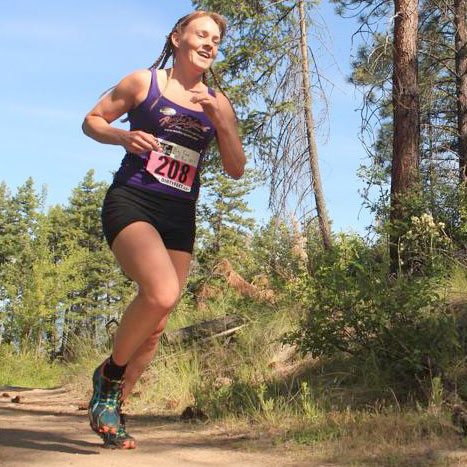 We at Rancho Vignola are very excited to be among those welcoming our long-time staff member and ultra-athlete Shanda Hill back to Vernon after a month’s absence in Switzerland!

Shanda has just finished the Swissultra Deca race in Buchs, Switzerland, which took place August 16 to 31.

Shanda was the first Canadian female to compete, finishing the race sixty-nine hours before the cut-off time and placing second female overall!

Entering the Quintuple Anvil last year in Virginia, USA, a race half the distance of the Deca, Shanda was introduced to competitive cycling for the first time. Subsequently she was the first Canadian female to ever take part in the Anvil, finishing in first place for women and fifth overall.

The Deca, a race that is the equivalent of 10 ironman triathlons, includes a 38-kilometre swim, 1,800-kilometre bike ride and a 422-kilometre run, which Shanda completed in 11.5 days. With short breaks to replenish, rest and change clothing, Shanda’s experience was at times extremely difficult. Dealing with blisters and tears in her quad muscles, amid daytime temperatures of 30˚C and humidity in the 50% range created some challenging moments! But the always determined Shanda ran through the debilitating pain of the last few laps, emerging triumphant as she crossed the finish line!

Shanda, now 36, has worked for Rancho Vignola since her teenage years, with a break of a couple of years after an accident which caused a brain injury and came close to ending her life, not to mention her athletic prowess! But Shanda soon bounced back from her significant injuries and began trying out various sports disciplines.

Rancho has been a proud sponsor of Shanda’s athletic activities for a few years now, and she’s our best ambassador ever! As a lifelong vegetarian, Shanda credits Rancho’s fresh nuts and dried fruit with keeping her energized and fuelled for her busy life as a young mother, landscaper and athlete!

With a work integrity like no other, Shanda is a shining light during Rancho’s busy harvest season. In addition to being a role model for new employees, Shanda also has the biggest and most generous of hearts, voluntarily making soup and sweet treats regularly for our entire staff of forty-plus!

We’re extremely proud to be one of Shanda’s sponsors, as well as her employer and family friend! Shanda, welcome to a justifiably triumphant return home!