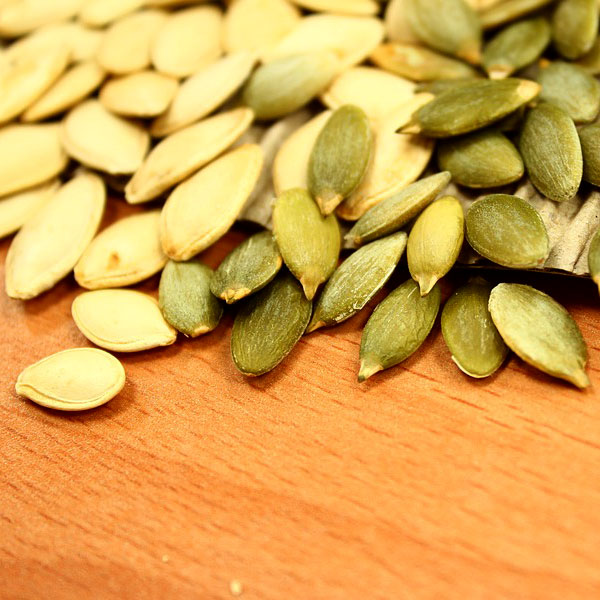 Welcome, October! Now that it is officially fall, it’s time to shift our focus to all things autumn. The nights are becoming cooler, the leaves are beginning to slip from the trees, and it’s time to break out those favourite harvest-time foods.

One of my go-to snacks, raw, roasted or salted, hulled or in-shell, there’s a variety of pumpkin seed for everyone out there.

We here at Rancho recommend that you keep your pumpkin seeds in an airtight container, away from light and heat, in a cool pantry or preferably the refrigerator. Raw pumpkin seeds can be frozen to maximize their shelf life and freshness.

Located in Austria, and family-owned since 1859, our pumpkin seed supplier is committed to sustainable and organic farming practices. The growing and processing of their products is done on a small scale, and electricity is supplied to the farm from their very own on-site hydraulic power plant. Surrounded by forest, our supplier uses wood gathered from their own property to keep their roasters burning. However, our supplier also ensures that a high volume of the wood remains, to ensure that the forest maintains its natural ecosystem.

If you’re searching for ways to incorporate more nutrient-dense foods into your diet, look no further than the pumpkin seed. Zinc and manganese are just a couple of the nutrients you’ll find in these little green beauties. Pumpkin seeds are also a good source of phosphorus, magnesium, copper, iron and antioxidants. In addition to the wide array of nutrients found in pumpkin seeds, they are also an excellent source of vitamin E. There are different forms of vitamin E, each with their own health benefits, and pumpkin seeds provide our bodies with several of these forms, making them vitamin E superstars! 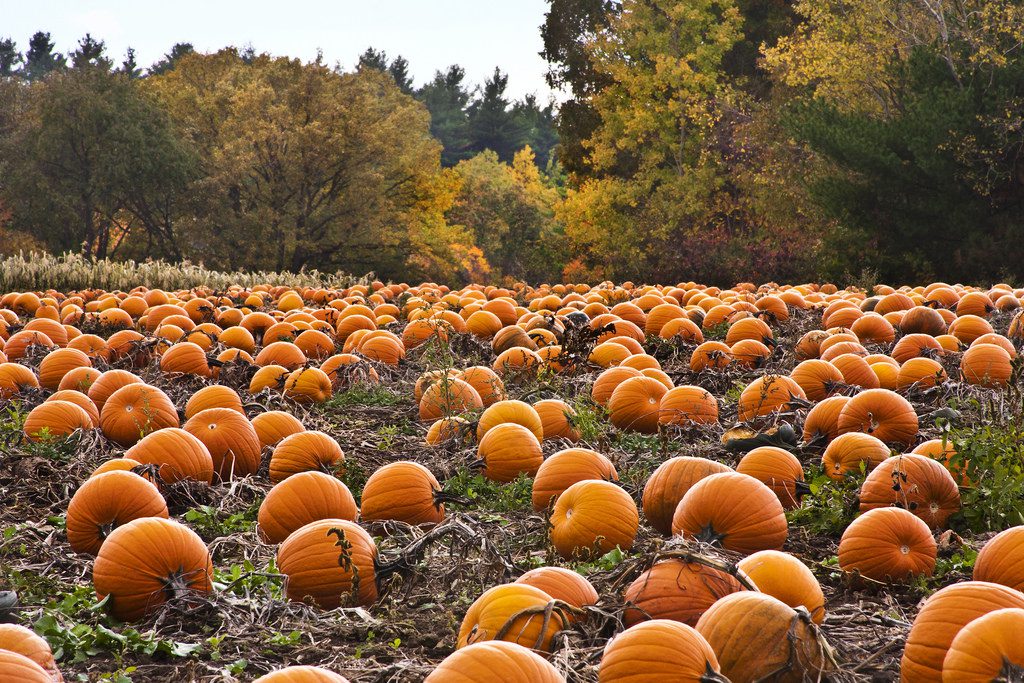 Though historians dispute the exact date, it is estimated that pumpkin seeds, or pepitas – a Mexican-Spanish word that translates to “little seed of squash” – were first discovered sometime between 8,000 to 10,000 years ago. Archaeologists have even claimed to find pumpkin seeds in caves located in Mexico that date as far back as 7,000 BC! Records show that Aztec cultures often used pumpkin seeds not only as a food source, but also as a ceremonial offering during religious rituals. During this period other Meso-American tribes, such as the Maya, began to utilize pumpkin seeds and pumpkin seed oil in sauces and other culinary dishes.

Pumpkins are indigenous to North, South and Central America. Native Americans first grew pumpkins as a sufficient food source alongside corn and beans. When corn, beans and squash are grown together, they are referred to as the “Three Sisters of Agriculture.” The planting of these particular crops became widespread among Native Americans due to the fact that the crops shared a mutually beneficial relationship with one another when grown in close proximity. The corn provided the beans with a natural trestle for stability, while the beans helped to secure the stalks of corn, protecting them from wind damage. The pumpkins provided the soil in which the plants were to grow with protection from the sun and weeds. Though this may seem rather rudimentary, this method is was actually a very early form of sustainable farming and ensured a successful harvest for the Native Americans!

Native Americans had many other uses for the pumpkin and the seeds harvested from within it. The Native Americans often used pumpkins as masks, dishes, carrying containers and musical instruments. The seeds, on the other hand, were used to combat internal parasites and kidney problems. Quickly learning from the Native Americans, early European settlers would make a tea from the seeds to give to those suffering from worms. The tea also made an excellent insect repellent, which was then applied to their crops and cattle.

Through exploration and trade, the popularity of the pumpkin seed began to grow. Europeans began to incorporate pumpkin seeds into their everyday diets, especially those living in Mediterranean areas. It is even thought that Columbus brought back a handful of pumpkin seeds to Europe after “discovering” them during his travels. 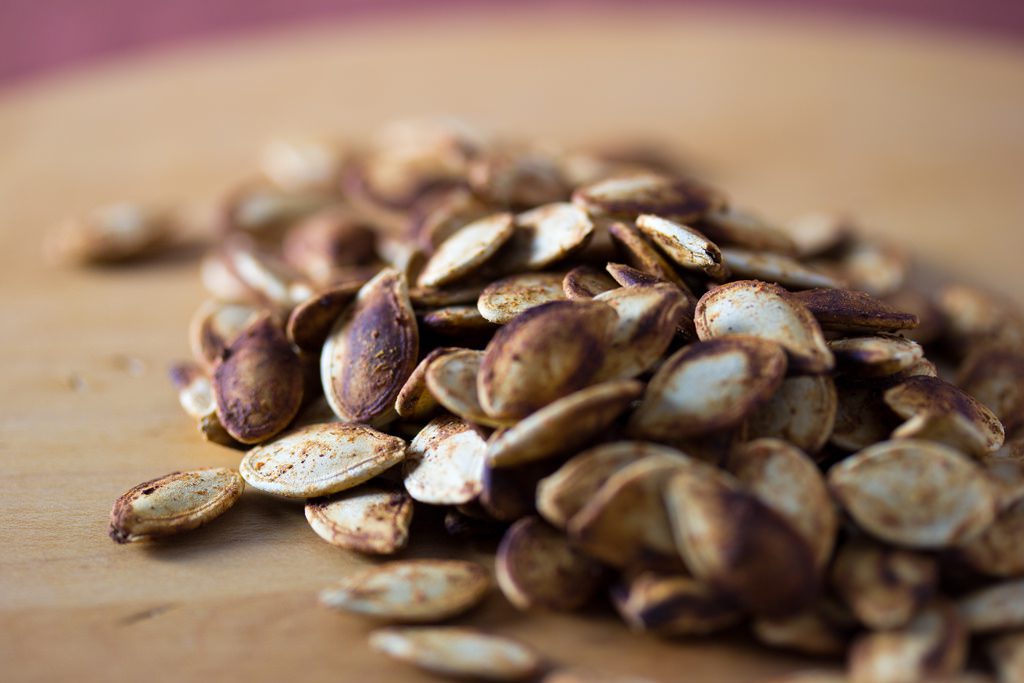 Pumpkin seed harvest begins when the pumpkins, which grow on low-lying vines, have reached maturity. Pumpkin maturity is determined by the colour and density of the skin of a pumpkin. Once maturity has been reached, the pumpkin is separated from the vine and left in the field to harden slightly. The pumpkins are then smashed and the seeds from within are collected. Much of the flesh left behind from the smashed pumpkins is left in the fields, as it will provide the soil with important nutrients, and is an eco-friendly alternative to chemical fertilizers. The seeds then undergo a cleaning and drying process. Seed pumpkins, such as the Styrian pumpkins that our suppliers grow, produce seeds that have a soft shell or are absent of a shell altogether, and do not need to undergo a hulling process after harvest. This decreases the time and labour it takes before the seeds can be placed into the hands of consumers. Though the flesh of the pumpkins is less than desirable, and not suitable for culinary purposes, the number of seed pumpkin varieties continues to grow due to the overwhelming demand for pumpkin seeds.

Specialized hulling machinery is used in cases in which pumpkin seeds are to be removed from their shells. Hulling can be accomplished by hand when it comes to small batches of pumpkin seeds, but commercially it is unfeasible. During the hulling process, rollers or cylinders apply pressure to the pumpkin seeds, carefully cracking the shell without damaging the seed within. Advancements in technology over the years have allowed for innovation to flourish when it comes to mechanical processes. Improvements to the hulling machines themselves have resulted in systems that recognize when a pumpkin seed has failed to be crushed, and will therefore “recycle” the seed by sending it through the machinery a second time. This eliminates much of the wasted product that resulted from early models of the hulling machines.

Today, China produces more pumpkins and more pumpkin seeds that any other country across the globe, although India, Russia, Ukraine, Mexico and the United States are also major producers. More than 100,000 acres of American farmland is dedicated to the growth of pumpkins, and there is evidence of pumpkin farming on every continent, with the only exception being Antarctica! Bees and moths also rely on pumpkin and pumpkin seed production, as the flowers of the plants provide these insects with vast quantities of pollen and nectar.

The popularity of pumpkin and pumpkin seed products in recent years is hard to miss. It wouldn’t be fall without catching a glimpse of someone drinking a pumpkin spice latte or seeing a friend share a recipe for roasted pumpkin seeds on your Facebook feed. As time continues to pass it will be interesting to see if the popularity of the pumpkin seed will continue to grow or falter, and how humans will continue to incorporate pumpkin seeds in their diets. New pumpkin seed products continue to emerge, with pumpkin seed oil becoming more and more prevalent on health food store shelves, and the inclusion of pumpkin seeds in conventional snacks such as granola bars or trail mixes. Who would have thought that an “agricultural sister” would evolve into a worldwide phenomenon? Or that a simple variety of squash would become a universal symbol for the autumn season? Whatever is in store for the future, it sure looks tasty.

Looking for some new ways to include pumpkin seeds in your diet? Our Cranberry Orange Energy Balls are the perfect snack to keep you going after your workout!

Or keep it simple with our recipe for Spiced Pumpkin Seeds.